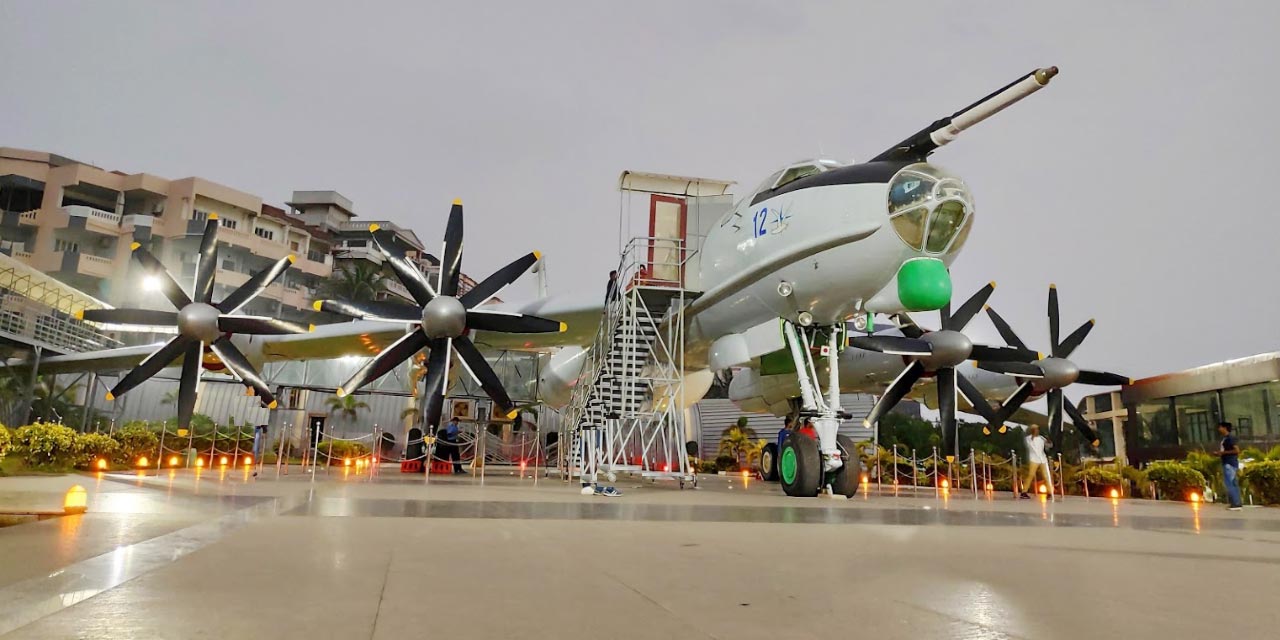 If you are in Visakhapatnam, you cannot ignore a wide variety of museums that the city boasts of, displaying a fantastic combination of old history with modern culture. Out of all those museums, one of the museums that is unique in its own ways is – TU 142 Naval Aircraft Museum.

Also known as the “Pride for the City”, TU 142 Naval Aircraft Museum offers a delightful experience for sightseeing lovers, history buffs and experience seekers interested in learning everything about the lives of Navy people. Located on the beach road, this museum gives you a chance to enter the aircraft that was earlier used for the Indian Navy.

Perfect for people of all ages, TU 142 Naval Aircraft Museum has an exhibition hall where you can see plenty of equipment such as survival kit, engine, data recorder, propeller, anti-submarine missiles and sonobuoys. All these equipment and parts of the aircraft are displayed in detail so that you can get enough information about the aircraft. Other than that, the museum also features VR rides that are a bit expensive but worth trying.

All-in-all, it won’t be wrong to say that TU 142 Naval Aircraft Museum is a not-to-miss attraction on your Vizag tour especially if you are travelling with your family as it gives a great exposure to the children.

Even though the TU 142 Naval Aircraft has served the Indian Navy for a long period of 29 years, it was converted into a museum after it was decommissioned at the Visakhapatnam Beach. Formed in the year 2017, the foundation of the museum was laid by Shri Nara Chandrababu Naidu, the former Chief Minister of Andhra Pradesh State and was inaugurated by Ram Nath Kovind who is the president of India.

The TU 142 Naval Aircraft Museum has several interesting facts which will surely leave you speechless. A few of them include:

The entry fee to visit the TU 142 Naval Aircraft Museum in Visakhapatnam is INR 70 for adults and INR 40 for children which also includes a free audio guide. Coming to its timings, the museum is open for its tourists from 2:00 PM to 8:30 from Monday to Saturday and every Sunday, it welcomes its visitors from 10:00 AM to 12:00 PM and from 2:00 PM to 8:30 PM.

Usually, the TU 142 Naval Aircraft Museum takes 2-3 hours, but if you finish early, you can plan to see the other popular sightseeing places in Visakhapatnam as the city keeps its visitors occupied with so many things to see and do throughout the day. These include:

1. INS Kurusura Submarine Museum: Nestled just opposite to TU 142 Naval Aircraft Museum, INS Kurusura Submarine Museum is another museum that you can plan to explore after enjoying your time at Aircraft Museum. It is a wonderful destination for history buffs to know about the submariners’ lives in detail and find out what navy people do to survive with limited resources.

2. Ramakrishna Beach: Just a few steps away from TU 142 Naval Aircraft Museum is Ramakrishna Beach. Also recognized as RK Beach, the Ramakrishna Beach is the most happening place that gives you a chance to play with crystal-clear clean waters with white sand scattered all around the place. You’ll feel like the time has stopped for you the moment you pave your way towards this beach.

Other places such as Visakha Museum, Rajiv Smriti Museum, Ross Hill Church, Tenneti Park, Kailasagiri Park, Dolphin’s Nose, Dolphin’s Nose LightHouse, Matsyadarshini Museum and ISKCON Temple can also be explored if you’re in Visakhapatnam for 2 or 3-days. You can also take assistance from the team of Holidays DNA to make the most of your Vizag tour.

By Air: Approximately 18 km drive away is Visakhapatnam International Airport which can be covered in 34-35 minutes if you come via Port Road, NH 16 or Allipuram Main Road. To reach the Aircraft Museum from the airport, you can opt for a local mode of transportation or book a taxi from Uber/Ola to get down to your favorite spot.

By Train: Visakhapatnam Railway Station maintains great connectivity to the prominent cities of India through railway trails. It receives regular trains from Hyderabad, Kolkata, New Delhi, Bangalore, Pune, Chennai, Coimbatore, Indore, Jaipur, etc. After arriving at Visakhapatnam Junction, look for a private vehicle from the list of top car rental companies in Visakhapatnam that allows you to enjoy comfortable and relaxed commutation while visiting the popular tourist places.

By Road: For all those who are staying somewhere close to the RTC Complex in Visakhapatnam, you can catch a local bus that takes you directly to the Aircraft Museum without any hassle. For your convenience, the APSRTC department also operates various buses that run frequently to and from Visakhapatnam at pocket-friendly prices. Hence, you don’t need to worry if you’re on a tight budget. The RTC Complex is only 5 km from TU 142 Naval Aircraft Museum.

Looking for an all-inclusive Vizag tour package that can help you make the most of your visit? You have come to the right place. We at Vizag Tourism, a division of Holidays DNA, take care of your holiday requirements and design travel packages that everyone can afford. You just need to fill in the Contact Us form to reach out to our team now!